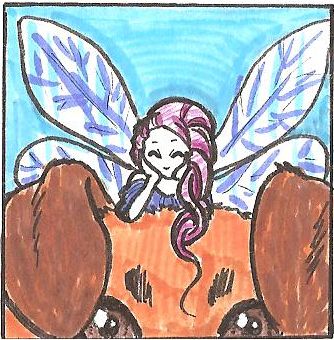 Message
53Published5Following401FollowersActivityJournalLibraryAbout
Budapest, Hungary
Joined February 15, 2016
Welcome, dear visitor!
You can call me Agatha or Agata.
I probably shouldn't be doing this, but the idea of this story just can't leave me alone, so I have to write it down.
About my English
I was studying Italian during high school, I learnt English by myself mainly with reading books (my mom is an English teacher so we have plenty of novels and language books at home), playing video games and reading a ton of useless thing on the internet.
Eventually I had to take the language exam, so I learnt to speak English (a little bit).
So please inform me about my linguistic errors so that I could correct them!

About the pictures
As strange as it sounds, I have free time only at my work place. So I draw the pictures of The 4 Fairy Kings on a too small and unsteady surface, without ruler or any useful tool. And when a costumer comes eventually I have to push everything under the desk...
And the scanning didn't do them any good too. (I may try to draw the next picture with pen only.)
And I'm not an artist anyway.^^'
Show more
Published

6 days ago
Fantasy & Mythology Just For Fun Wwffy Wwyff Parody Dragon   ...Angel Demon Werewolf Vampire
You can enjoy a cliched dungeon this time. //Sorry, but I'm too tired now to write the usual warnings, so I just can hope that you won't be surprised when you find cliches and extreme character types in this story, because it's a parody and experiment. Other errors are due to lack of sleep. Ugh, I went and wrote it after all. Now, time to sleep *I'm at work...*//

7 weeks ago
Fantasy & Mythology Just For Fun Parody Wwyff Wwffy Dragon   ...Demon Vampire Werewolf Angel
Almost as if paying homage to the current weather (at least that of my country) in this chapter you'll wander about in a scorching desert. And of course you'll encounter a few cliches. //This story is an experiment and parody. So extreme characters and cliches are intentional, but grammatical errors are not.//

3 months ago
Fantasy & Mythology Just For Fun Parody Wwffy Wwyff Dragon   ...Demon Angel Vampire Werewolf
Wulf finally got the information you've all been looking for and swings into action. Finally it's time to save Hero and fight an epic battle against to evil usurper of the castle...! Nope, this is not that kind of story. //This is a parody and experiment! In other words I concentrate more on putting a lot of cliches and nonsense in the story rather than on the storyline (but there's still more story in it than in some real books published in our world XP). That's why you'll find in it more exagerrated character types and cliches than epic battles! But hm, I should make an epic battle parody sometime...//

5 months ago
Fantasy & Mythology Just For Fun Wwffy Wwyff Parody Dragon   ...Vampire Werewolf Demon Angel
You continue your undercover mission (in reality: you continue washing the floors of the castle), hoping that you find out where the evil mage keeps Hero as a prisoner. Then you get a break from floor-washing, you are sent to the casstletown to buy some things for dinner. Would it be a chance to meet the guys? //As always: that's a parody and experiment, so exaggerated cliches and characters are intentional, but errors are not!// And similar to the last chapter, you should read all of the results this time too.

About the reader-love interest pairings in Cliched

As most of you know I published a survey about which reader type suits which guy, when I published the first chapter of Cliched.
The plan was that I burden you with that responsibility instead of deciding myself (I'm bad at deciding things anyway), and until I finish chapter two and three I would get clear answers and can proceed with that arrangement. The first problem was that I didn't receive clear answers (I will talk more about this later) and because I didn't know how to close the poll (I still don't, so I closed it by deleting it) more of you was kind enough to fill it out, so the result has eventually changed compared to what it was when I started this series. I think that the result is the more accurate the more answers I get from you, but because it would be confusing if the pairings changed again, I decided to close the survey now.
I thank everyone who contributed to it!
So, of course I didn't get a clear-cut result, there were boys who had the 'highest affinity' with two reader types, and poor Wulf didn't  got the 'highest affinity' with any. And sometimes the difference was only one percent.
But beginning from the most obvious results I worked out these pairings:
(If you don't want to spoil the pairings don't read further this point!)
.
.
.
.
.
sweet/happy reader type->Damon
aggressive/efficient->Raph
passive->Wulf
crazy->Drake
shy/silent->Vlad

And here's the result of 178 answers, if you're curious:

kotorikago
Somehow I managed to publish chapter 24. It's the second last chapter of the medieval fantasy miniseries.
The moral of this chapter is that long results take long to write. (They're more or less as long as the chapter itself.)
I haven't been in the best shape when I double-checked the text (allergy season means less oxygen to my brain), so let me know if I missed a big error.
Show more ▾
6 days ago ·
Comment 1 ·Like 8

kotorikago
Chapter 23 is here! (I was very fast, I wrote it in 4 saturdays. It just took this long publishing it because I fortunately was on holiday on some of the saturdays.)
Anyway, there will be two chapters of similar length and the medieval fantasy arc will end. Then you'll go back to the House, and then... what will happen is still a secret even for the author. ^^;
Show more ▾
7 weeks ago ·
Comment ·Like 6

kotorikago
I thought I wouldn't make it because there was so much work today, but I still made it!
Chapter 22 is here! A bit longer than the previous chapters but with deffinitely shorter results.
Announcement: the medieval fantasy arc will have other 2 or 3 short chapters before we can turn to our 'normal life'. I plan to write really short chapters which I can finish in a month, but since I can't know how long these will be until I finish them and since I'll go to my long awaited holidays in July, you shouldn't expect them so soon. ^^;
Show more ▾
3 months ago ·
Comment 2 ·Like 14
See all