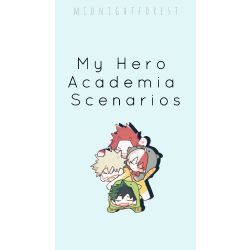 Some cute scenarios with your favorite boys.
Published July 28, 2019 · Updated 9 months ago100 pages · 890,359 reads
Anime/Manga   Fanfiction   Spoilers  Fluff  Angst  ...Reader Insert  Boyfriend Scenario  Dabi  My Hero Academia  Bakugou Katsuki  Todoroki Shouto  Midoriya Izuku  Iida Tenya  Bnha X Reader  Kaminari Denki  Shinso Hitoshi  Report
9 months ago · 100 pages
When you ask them out on a date
When you catch them staring
When you hear them talk in their sleep
When they accidentally hurt you
When they see you cry
When you two become official
When they meet your parents/guardians
When they flirt
When you go on your first date
When they hear you speak a different language
When they hear you singing
When you watch a Disney film
When they see you fangirling
When it's their birthday
When you argue/fight
When they overhear you talking about them
When you use old slang
When they send a drunk text
♡ 𝚂 𝚙 𝚎 𝚌 𝚒 𝚊 𝚕 ♡
When you call them the wrong name
When you bring a stray dog
When they get hit with a de-aging quirk
✎
TTInfo

When you ask them out on a date

You've known each other for years now. You work together both inside and out of school, so it was no surprise to you when you started catching feelings towards him. But while you knew exactly how you felt, you weren't sure if he felt the same. After many pep talks to your reflection in the mirror, you marched your way towards the school and when you saw him you asked him on a date. Needless to say, he was surprised but said yes.

Iida Tenya
It took many, many, efforts to build up the courage on asking Iida out. He always seems serious and gave off the impression that he only cared for school and had no intention of dating. But with a few conversations with Uraraka about him secretly liking you,  she helped you ask him out. You asked him out first thing in the morning before anyone entered the class, and after a few minutes of him mumbling about making time for your date, he said yes.

You knew off the bat that if you were to ask him out in person the poor boy might pass out. So you wrote your question on a piece of paper and when the teacher wasn't looking you told the person behind you to pass it to Amajiki. It was sort of childish to ask him out that way, but it worked. When he received the small note he gasped in surprise that you were asking him out, but quickly circled the word 'yes' in the bottom and handed it back for you.

You had asked him out during training. The two of you were teamed up and before you started you told him that if you guys win, you'll take him out on a date, surprisingly he didn't say anything, he only made a soft 'tch' sound before you were signal to start. Once the practice was over and you two won, he looked you straight in the eyes and said he wasn't paying for the date and he'll be ready at six for the date.

Midoriya Izuku
In all honesty, you had to thank Mina for being able to convince you to ask Midoriya out. If it wasn't for her constant whining about not seeing you two together you wouldn't be standing in front of his dorm room waiting for him to answer. You gave him a few minutes to open up, and when he didn't you assumed he was sleeping, but nope, he wasn't. He was just out with Todoroki and when he headed back to his room he saw you standing there. Asking why you were there you asked him out, causing the poor boy to blush madly while stuttering to say yes.

Shinso Hitoshi
You didn't prepare or gave yourself a motivational pep talk like other people did when they were about to ask out their crush. No ma'am, you just drove right in. After Shinso finished training with Aizawa you caught up with him and asked if he wanted to go out during the weekend. He was taken aback seeing how you wanted to go out with him but he said yes, enjoying your bright smile as you waited for his response.

Togata Mirio
You had have asked Togata out many times, but he always took them as a regular get together and would invite almost everyone who happens to be around. You didn't mind, but you did want to just go out with the cheerful blond. Instead of asking him out during school hours like you normally do you asked him out after school when you saw him walking with Amajiki. Lucky for you, the shy boy knew your intentions with wanting to go out with his friend so he silently walked away to give you privacy. When you two were alone you had asked him out, and you said you only wanted to be with him, and he said yes.

Kirishima Eijiro
It was during your break while patrolling with Fatgum did you get the sudden urge of asking the redhead out. You had your mentor to thank for giving you the boost you needed to ask him out. Unfortunately, Kirishima wasn't with you two that day so you called him, with Fatgum beside you giving you thumbs up in encouraging young love. You waited till he answered, and when he picked up you wasted no time and asked him out. Hearing a sharp squeal you pulled your phone away from your ear only to hear his poor attempts of coughing. He cleared his voice acting as he didn't freak out on you asking him out and said yes to the date.

Todoroki Shoto
You couldn't believe you were doing this, it had to be a dream. There was no way you would be asking Todoroki out, but yet there you were, asking him out or at least trying. Oh how much you wished you'd thought this through, cause maybe if you did you wouldn't be in front of him trying to ask him out without looking like a fool. You couldn't form a proper sentence without stuttering, worst part is that he knew you were asking him out but he didn't want to interrupt you. Finally, after a miserable five minutes of you trying to ask him out, he gave you his answer in five seconds. Which of course was yes.

Usually, he was the one to ask out the person, but you didn't care. While you saw him getting rejected once again you made your way towards the electric boy and asked him out. He was surprised none the less but he said yes to your date and said he looked forward to going out with such a lovely gal like yourself.

I'm all caught up with the manga so for some characters there will be spoilers! I will put warnings in the beginning and mark the characters that will have spoilers. As for comments regarding those spoilers I suggest you put warning beforehand so others don't see since not everyone reads the manga. If you don't then I will delete your comment.

BNHA and characters belong to their rightful owners.