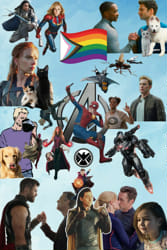 Fai Romanoff
This takes place where Endgame and Far From Home left off. Follow earth's mightiest heroes through their everyday life. Not only their missions and their fights but also stuff that any other person can go through. The new Avengers were formed shortly after Peter Parker's name was cleared. The Avengers started small but they're strong through it all. Idk i just got that last line from youtube🤷‍♀️
Action Fanfiction Humor Marvel Domestic Avengers Avengers Bucky Barnes Tony Stark Steve Rogers Natasha Romanoff Sam Wilson James Rhodes Shield Wanda Maximoff Clint Barton Sambucky Thorbruce Pepperony Peter Parker 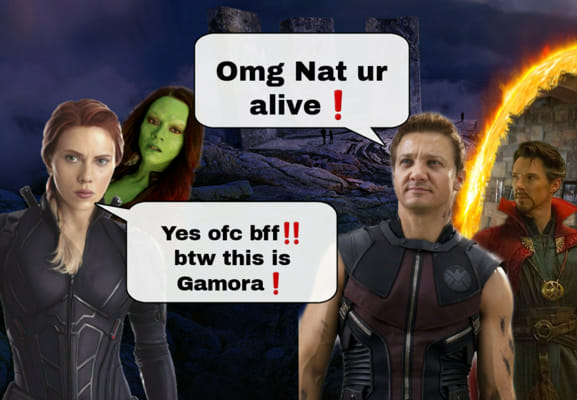 Thanos looked around at his army turning into dust, he sat down and turned into dust himself. Steve looked around with a smile on his face realizing they won but then turned to look at where he had last seen Tony and his smile fades. Rhodey and Peter flew and swung down to the man that had just snapped his fingers. Rhodey put his hand on the side of Tony's head and teared up. He steps aside when he heard Peter behind him.

"Mr. Stark.? Hey... Mr. Stark..? Can you hear me? It's Peter...We won, Mr. Stark.. we won, w-we did it- you did it, sir.. you did it... I'm sorry, Tony." Peter was sobbing as he spoke and Pepper came from behind him to see her husband. She held the boy back and kneeled down to Tony. "Hey," "Hey, Pep." Tony answered with a weak voice sounding like a whisper. "Friday?" She asked putting her hand on his reactor and looks into his eyes. "Possibility to surviving." The robotic voice answered. Tony and Pepper smiled at each other, Tony looks to the side. "Tony, Tony look at me," He looked back at Pepper, "You're gonna be ok.. you can rest for now," She said kissing his cheek with a smile on her face. The Avengers stood around them with tears in their eyes but they were smiling, relieved their friend Tony Stark could survive.

Tony was taken to Wakanda through one of Stephen Strange's portals where he was treated by Shuri and a couple of other doctors. Tony got in a coma, while he's in a coma Shuri and the other doctors could fix his health, his right arm and right side of his upper body.

"Remember, you have to return the stones to the exact moment you got 'em or you'll open up a bunch of nasty alternative realities," Bruce opened up the case with the infinity stones inside. "Don't worry, Bruce. I'll clip all the branches," Steve said closing the case and picking it up. "You know I tried. When I had the gauntlet and the stones I really tried to bring her back... I'll miss her man," He said looking down at Steve. "Me too," Steve answered with a sad look on his face. He walked up to the platform with the case and Mjolnir. "Ready, Cap?" Steve nods, "Alright we'll meet you back here, ok?" Sam, Bucky, and Steve all look back and forth at each other. "Going in quantum in,"

Steve comes back with an empty case and without Mjolnir, he walks down from the platform. "Welcome back." Sam smiled at him with his arms crossed over his chest but then they all get interrupted by Clint running towards them shouting something about 'Banner brought back, Vormir, Strange's portal, she's back,' He got to them and bent over to catch some air, he was panting and Bruce gave him a bottle of water.

"Natalia Romanova, welcome back to the world of the living," The Red Skull stood over Natasha that had just appeared on the cliff after being dead for nine years.

"Barton, it's a planet outside of our solar system--"

"pLEASE!! Can't we just check if she actually came back? Plus, you know how to get there,"

"Fine!" Strange said frustrated and started to make a portal to Vormir. Clint and Stephen walked through to see a nervous looking Natasha leaning on a giant rock a few meters away looking down at the ground. "Tasha? Oh my god I knew Banner's snap would work," Clint slowly walked towards his friend and she looked up and she threw herself on him for a hug. "I never thought you'd come... also this is Gamora!" She gestured towards a green woman and the woman waved. "We should get going, come on." Strange said already walking through the portal back to Tony's house. Pepper and Morgan were in Wakanda with Tony and they let Clint, Wanda, and Stephen wait there till Steve and the others were done with what they were doing outside. Wanda was in the kitchen making a sandwich with music in her ears so she couldn't hear Clint and Stephen arguing in the living room.

They got out of the portal, the portal closed and they stood in the living room. "Wanda's in the kitchen, Tony, Pepper, and Morgan in Wakanda with T'challa and Shuri, the Parker kid is in Queens with his aunt and friends, I actually think Thor left to go to space with those Guardians and Steve is with Bruce, Barnes, and Sam outside," Clint said before Nat went to the kitchen. She walked up behind Wanda and tapped her shoulder, Wanda took off her headphones and turned around. She put her hands on her mouth in shock and hugged Natasha. Clint ran outside to tell the others and the others in the house ran after him.

Steve comes back with an empty case and without Mjolnir, he walks down from the platform. "Welcome back." Sam smiled at him but then they all get interrupted by Clint running towards them shouting something about 'Banner brought her back, Vormir, Strange's portal, she's back,' He got to them and bent over to catch some air, he was panting and Bruce gave him a bottle of water.

Behind Clint came Wanda, Stephen, and Natasha. "Natasha?!" Steve, Sam, and Bruce all questioned at the same time. Bucky just stood in shock and didn't say anything, feeling like he shouldn't ruin their moment. "Okay! So I'm guessing we brought everyone back? Also, Clint said that Tony's in Wakanda with Pepper and Morgan?" All of their smiles fell and Steve was the first one to say something. "After we got back we fixed the gauntlet and Banner snapped his fingers, Thanos traveled from the past and there was this huge battle and.." Steve trailed off. "And?" Natasha asked worryingly. "And Stark took the stones and snapped his fingers before Thanos could use them and now Stark is lying in a coma in Wakanda," Stephen finished Steve's sentence looking down at the ground, nobody said anything for a short while.

"I have to get back to the Sanctum," Stephen said turning around opening a portal, and walking through it. Gamora followed him through it so he could get her to Thor and the guardians.

A little while later they were all sitting on the Stark's house porch. "Give me a second, I just have to get something from inside," with that Steve stood up and walked inside the house. He came back out holding his shield. "Sam? How would you feel about becoming the new Captain America?" Steve held out the shield to Sam, he looked up at Steve with wide eyes and stood up. Sam took the shield and stood there just holding it for a little while. "How does it feel?" Steve asks smiling, "Like it's someone else's," Sam looked back at Steve. "It isn't," Sam smiled at his words and took a deep breath, "Thank you, I'll do my best," Sam said. "I know you will," Steve patted him on the shoulders and smiled. "To the Captain," Natasha said with a smirk and held up her cup of tea.

2024 Right after the events of ffh

"Strange!" Peter shouts sprinting inside the Sanctum Sanctorum. "What is it?!" Stephen yells running down the stairs with Wong. Peter pulls out his phone and shows them what was just on the news.

"This is breaking news. We come to you now with revelations about last week's attack in London. An anonymous source provided this video, it shows Quentin Beck, aka Mysterio, moments before his death. A warning: You may find this video disturbing.

Beck: "I managed to send the Elemental back into the dimensional rift but I don't think I'm gonna make it off this bridge alive. Spider-Man attacked me for some reason, he has an army of weaponized drones, Stark technology. He's saying he's the only one who's gonna be the new Iron Man, no one else.

EDITH: "Are you sure you want to commence, the drone attack? There will be significant casualties."

Parker: "Do it. Execute them all."

This shocking video was released earlier today on the controversial news website 'thedailybugle.net,'"

J. Jonah Jameson: "There you have it folks: conclusive proof that Spider-Man was responsible for the brutal murder of Mysterio! An interdimensional warrior who gave his life to protect our planet, and who will no doubt, go down in history as the greatest superhero of all time! But that's not all folks, here's the real blockbuster. Brace yourselves, you might wanna sit down."

The video ended, Stephen handed the phone back to Peter. "Let me guess. You came here because you need my help to clear your name?" Peter nodded at Stephen's guess. Stephen let out a sigh, "I'll help you. I'll clear your name but you'll have to live with the world knowing your identity," Peter thought for a moment. "Is that not gonna be dangerous for my friends and my aunt? Y'know, if bad guys try to go after them?" Stephen sighed again, "Nothing will happen, everything's gonna be fine," with that Stephen and Wong turned around and walked back upstairs. Wong continued walking and Stephen turned around, "Come on, I don't want a bunch of angry Mysterio fans going to murder you,"

Stephen cleared Peter's name so now people know he didn't brutally murder Quentin (and that Quentin was a bad person). People know that he's Spider-man now tho, he went to school and talked to the principal. The principal agreed on letting Peter stay in that school and that he won't be treated differently just because he is Spider-man. Some people still ask for pictures and stuff at the school tho so his school life isn't exactly like when his identity was a secret (He still only hangs out with MJ and Ned tho)

Bruce decided to go back to how he was before Endgame, mostly because it was starting to annoy him. So now he's a normal tiny Banner. He learned how to control the Hulk -kinda- so he isn't afraid of losing control.