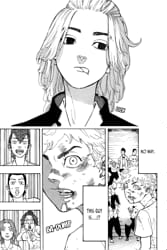 A girl from a mafia family found herself in the midst of Japan's middle school gang war.
Published 5 months ago · Updated 3 weeks ago140 pages · 51,761 reads
Action   Anime/Manga   Fanfiction   Tokyo Revengers  Tokyo Revenger  ...Sano Manjiro  Sano Manjirou  Mikey  Takemichi Hanagaki  Drakken  Manga  Tokyo Manji  Toman  Tokyo Manji Gang  Tokyo Manji Revengers  Report
3 weeks ago · 140 pages
Prologue
01 "Beat him to death Kiyomasa!"
02 "From now on, you're my bitch okay?"
03 “My friend and his girlfriend were attacked by Moebius”
04 "I'm going to make him notice me by being more mature!"
05 "I'm pregnant"
06 “Promise?”
07 “Takemitchy can you afford international phone call?”
08 “I Like You”
09 “I’m Going to Be the Top Guy In Toman”
10 “Do you still love Mikey-kun, Takahashi-san?”
11 "I'm Sorry"
12 "I forgive you"
TTInfo 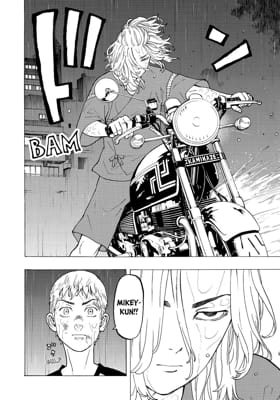 It was spring, she remembers she was six, when her father dragged her to a dojo in the middle of Tokyo alongside her older brother with a grunt before promptly speeding off. Leaving them alone in front of the gates of the dojo.

She had asked. Why did you send them there?

"So you will start exercising" said her father back then. "Its shameful for me to have such a sickly daughter"

"What about brother then?" She doesn't know what kind of courage bubbled inside her because she never talked back to her father. "Why should he come? He- I can go alone, Brother should rest"

Her father scoffed harshly. The long scar that ran from his forehead to the edge of his mouth twitched as his mouth tugged into a harsh frown. He is always like this. Harsh and prickly. The smallest mistake could set him off.

"To make him stronger" he spat out. "No heir of mine is that weak" the resentment dripping from his tone makes her shudder. Scary, her mind whispers and the air in her lungs started to leave her body.

The hand around her tightened.

Sakura petals could be soon floating through the air as she absentmindedly registered the trembling hands of her brother. Its weird, she thinks. That it's obvious that her older brother is scared but he keeps putting on a brave face. Both of their Japanese is not the best. What with them just move to the country a mere three months ago.

This foreign land with different language, different culture, different everything scares the both of them. They don't know where Mother went. Father had just grunted that she had gone somewhere and will never meet them again before he moved them to Japan, the homeland of their mother.

Their father is no more but a fleeting figure now. Hardly appearing and spending most of his time in Europe.

It's only brother and her. Alone in this strange land full of people they don't know.

"Fratello" the language of their birth country slipped out of her naturally. "Is- what should we do now?"

Her older brother looked down on her. The expression he wore is something helpless as he, too, found himself utterly clueless. Japan is not Italy. He doesn't have any friends here. His Japanese is wonky and a bit weird to have a conversation with at best.

But his sister is here and he needs to do what every big brother have to do. "Do you want to run-"

"Hey what are you brats doing here!?"

Turns out the old grandpa that yelled at them is the owner of the dojo.

He's a grandpa with fearsome face but eyes full of warmth. The thick bushes between his nose and lips gave him the feeling of a fearsome beast. Although, she couldn't help feel comfortable when the older man had petted her head softly as he guided the both of them inside.

The white uniform he's wearing looks like something that she would see in a martial arts movie. Considering her father did send her to a martial arts dojo, she's not surprised.

"So you're the kids of that guy that called earlier?" said the Grandpa as he walks in front of them. Both of his hands are tucked behind him. "You guys looked foreign" he added.

Truthfully, she didn't really get what he's saying but her older brother had always been the smarter one and he too had a better grasp of Japanese than her. "Ah Yes" he said softly. "We're half Japanese from our mother side" as he said that, he gave the Grandpa a small bow. A sign of respect in Japan, if she remembers correctly.

"Hoo" said the grandpa. "So what's your name? I have a granddaughter with foreign name y'know and my other grandson started calling himself Michael or something"

It took a few moment for her brother to processed what the older man said before a small smile appeared on his face. "I'm Matteo and my younger sister is-"

Both of them flinched at the loud sound.

It was coming from the main room inside the dojo. Grandpa seems to catch what had gotten their attention before he motioned them to come closer towards the dojo. She could see there was a crowd of small children inside it, all of them watching a small kid, her age maybe, leapt to the air and promptly kicks the practice dummy with such force.

She can't help but gawk.

The kid stopped his practice before he turns around, grinning to a black haired boy who also seems to be his - hers too - age. A girl with light hair appeared, also grinning as the three of them started to converse.

"Hey" she tugged her older brother hands. "That was cool" she said in Italian.

Her older brother found himself nodding his head too. "Yeah" he answered, also in their native language. "I thought martial arts started to die out in this modern world"

"I know right!" she grinned. "Maybe- maybe father is not wrong for sending us to train here" the image of the boy leaping to the air still played inside her head like a broken record. "Imagine if we can do something like that!"

"It is cool but..." her brother eyes trailed towards the group of kids training inside the dojo. "I think I already passed the age limit to become a student here"

She found himself blinking. "Huh?" as she said that, her eyes flickered towards inside the dojo and yes, inside it is just kids- kids her age. From the looks of it, her older brother who is nine years older than her can't train here with them.

Panic welled up inside her chest.

No- Brother can't leave her here. She doesn't want brother to leave like Mother. Please-

"Huh? What are you guys talking about?"

Their attention snapped towards the source of the voice. Its Japanese- No, its the boy from before. The one that leapt to the air.

"You look old" said the boy, as he pointed towards Matteo.

It took time for Matteo to process that statement before he blinked incredulously. "..Old.. Are you talking about me?"

"You speaks weird!" He said. "And yes! Is there any old person here other than you?"

"Gramps is not old, he's like suuuperr old" the blanched. "Anyway what are you doing here? You should play with my brother! He's also old"

"Ah i..." Matteo pushed her back. Ushering her to step forward. "My sister... will start training here"

His attention turned towards her.

She fight the urge to fidget as he continue to stare at her silently. It was awkward, when she was about to broke the silence, the boy finally spoke up. "You look like Emma!"

"Yeah, you look foreign, like Emma, my lil sister"

It was silent again after that. She could hear her brother sighing beside her.

"You don't talk much do you?" said the boy again, cocking his hands on his hips.

Her head started to spin because he talks so fast and she can't catch all the things he said. Though, he recognized when he shoved his hand forward. A universal sign to handshake.

It was their first handshake and a start of their relationship.