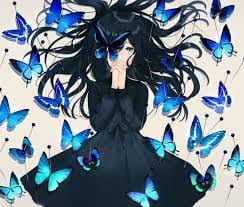 Person
Tsukiko has a mission, and she'll do anything to finish it. Follow her as she travels to find her best friend. Even with her secrets, she's sure nobody will find out. After all, how hard could it be with 20 other hero-wannabes around you?
Anime/Manga Fanfiction Uraraka Mha Bnha Quirk Mystery Vigilante Hero Villain 1a Ua Manga

A girl with reddish-brown hair frowned, watching her sister talk with the girls animatedly. Tsukiko was happy for her, sure, but she also wanted to be brave enough to walk up to someone and talk to them!

(Tsukiko would never admit it, but she felt jealousy bubble up in her. It made her want to hit something, to hurt people-)

Tsukiko shook her head, getting rid of unwanted thoughts as she sat on the swings, kicking her legs aimlessly. Moss grew in the gaps, and Tsukiko rubbed it with her foot. The grey-eyed girl sighed. Her sister, Ochako was coming.

"Hey Tsuki! I made some new friends today!" She beamed. Tsukiko felt her heart clench. Why couldn't she be as happy as her sister?

Instead of telling her thoughts, she pasted on a smile and said, "That's great!"

The next day, Ochako was still with those girls. Tsukiko scrunched up her brow in the way only nine-year-olds could.

"You good?" Tsukiko yelped, swinging her fist at whoever snuck up on her.

"Ow!" They yelled. Tsukiko turned around, seeing who she hit.

It was a boy her age. He had brown hair and ocean blue eyes, and was clutching his stomach. "You hit hard!" He complained, pouting.

"It's fine, don't worry. My name's Tsukanoma Kanmi, but you can call me Kanmi!" He grinned, pain forgotten.

"Well then Tsukiko-Chan, would you like me to push you? It's no fun if you're alone on the swings!" Kanmi smiled, his blue eyes sparkling.

"If you want," Tsukiko replied shyly, looking away.

"I like your freckles, they're cute!" Kanmi added, pushing the girl on the swings.

Today I'll be going to the doctor to see my quirk!" Kanmi gushed, bouncing up and down. The duo had only known each other for a few months, but were best friends.

"That's cool. I'm going next week," Tsukiko replied. "I'm sure you'll get a strong one," She added, looking away. "And I'll be weak," She mumbled, but Kanmi heard her.

"Don't say that! You'll be strong, I know it! Even if you aren't, we'll still be friends!" He declared.

"Hey, Tsukiko! I got my quirk!" Kanmi said excitedly.

"Really?" Tsukiko blinked, looking up at her taller friend.

"Mhm! It's called Premonition!" Kanmi grinned. "I can see 5 seconds into the future, but have to wait for 10!" He grinned widely.

"That's cool," Even though Tsukiko sounded bred, she was truly happy for her friend.

Tsukiko nodded. "I don't have one," She replied, looking at her hands miserably. "I'm sorry, we can't be heroes together," She apologized, a tear slipping out of her eye.

"It's fine! You can train hard, and use support items like Eraserhead!" Kanmi grinned, raising her hand above their heads.

Kanmi smiled widely at the grey-eyed girl. "Of course! I promised, didn't I?" He asked, tilting his head.

"I guess you did," Tsukiko replied, thinking. "Thank you,"

Even though she didn't say why, Kanmi knew.

"Why a butterfly?" Tsukiko tilted her head curiously.

"Well, you said you liked butterflies, and there's one right there!" He added, pointing at the hydrangea.

"Thanks, have some!" kanmi offered brightly, shoving it in her face.

Tsukiko shrugged, taking a bite out of it. Behind her, Ochako gasped.

"You guys kissed!" She squealed.

Tsukiko blinked, her face turning a brilliant shade of red. The same phenomenon happened to her best friend.

"Yes you did! It was an indirect kiss!" Ochako cackled.

Tsukiko knocked on the door, scruffing her shoes on the concrete. She was at her best friend's house, waiting for him. He hadn't come to the park earlier, which was unlike him. Usually, he was bouncing u and down to leave the house.

The door opened, and she came face-to-face with a police officer. He was tall and had a trench coat as well as dark brown hair. Tsukiko frowned. She didn't remember seeing him before.

Rubbing the corner of her eye, she craned her head to look up at the stranger. "Is this house 243? I don't remember seeing you before," She said bluntly. She looked around, noting there was a crest of some sort painted on the wall.

"Yes it is. I'm detective Tsukauchi, nice to meet you," He smiled, crouching down and extending a hand for the 10-year-old to shake.

Tsukiko looked at it and raised an eyebrow. The detective awkwardly drew his hand back. "Why are you here then?" She interrogated. On closer inspection, the crest was made of 2 words and a small dragonfly on top.

"Well, Tsukanoma Kanmi-Kun has gone missing, so we're looking for him," Even though he smiled, Tsukiko could see the troubled look in his eyes.

"He's... missing?" Tsukiko blinked, her eyes widening. "How?" She asked again. The words on the crest read, 'Toxic Blue'.

"We're not sure, so we're trying to find out why," Tsukauchi sighed, standing back up. "I need to go. Are you coming in...?" He asked, and Tsukiko knew he was asking for a name.

"Uraraka Tsukiko, and no thank you," She said before turning around and walking home rapidly, the crest engraved in her mind. Tears clouded her vision as she tried to get home.

When she got home, she immediately kicked off her blue hightops before near-running to her room. She slammed the door behind her and sat down.

How did he go missing? Something's not right, She thought, sighing. What's the toxic blue? She added, logging onto the computer and googling it.

The results were useless.

They were a criminal organization that would take quirked users. Nobody knew what would happen after that.

"What a waste," The auburn-haired girl grumbled, opening her door. She walked back to the front door and shoved her feet in her shoes. She pushed the door open aggressively and walked out. She wiped her face, hoping it wasn't too red or puffy.

She walked through the streets, ignoring the people around her. Instead, she ducked her head and stared at the cracks in the sidewalk.

There was moss growing, colouring the pathway green and brown. Tsukiko remembered a rhyme.

Right into the middle of a road.

Tsukiko's eyes widened as a car hurtled towards her, crashing into her. Time didn't slow down or stop like in the movies. It didn't speed up or become clearer. It continued normally, the car speeding towards her.

Tsukiko squeezed her eyes shut felt the crunch of metal against her clothes, the glass shatter, and something in her that didn't belong there. It was unnatural, and it coiled in her veins, swirling and flowing inside of her.

It was silent for a moment as if the world had stopped. And when the girl cracked her eyes open, she was shocked. She wasn't dead for starters, and the car was completely destroyed around her. The driver was safe, thankfully, but the strangest thing was her.

The redhead was unharmed and surrounded in a red glow. I'm... alive? How? She questioned as smoke rose around her.

The car then exploded, causing her to blackout.

"You tell everyone those cheap words, but do you even mean it?"
"O-Of course! I'm going to save everyone!"
"You didn't try to save me, you liar!"
"In a second, I would gladly give up. There's nothing left for me."
"This is why you're alone, Takahashi, and you always will be. Nobody wants to be around you."Dream Eater
Next »
Author