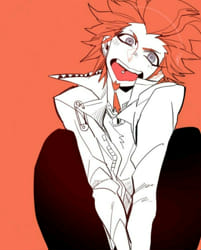 Kira
A basic outline for me to remember by.
Anime/Manga Fanfiction Mystery

Chapter 1: Makoto is found dead in his bathroom. Monokuma announces that the class trial will be held and Junko protests. She is saved by Kiyotaka, who dies. It is uncovered that there are two keys to Sayaka's room and blood in her bathroom. She is found dead and executed (Stage Fright) She's placed on a stage and told to sing to fill a bar. She almost succeeds but Monokuma smashes the bar and she is snapped in half by a bear trap. Leon is the new protagonist

Chapter 2: The second floor is opened and Monokuma tells the group that if someone isn't found dead, their secrets will be revealed. Hifumi is found dead in the boy's locker room by Mondo and Chihiro. It's revealed that Chihiro is a boy. Byakuya tells everyone about Genocider Syo, and that Toko is Syo. She refuted this and it is revealed by Kyoko that Byakuya is the only one who knew the specifcs about Syo's killings and is found guilty. He exploited Toko's secret to kill Hifumi and escape back to his empire. Byakuya is executed (End of the Togami Empire) He is thrown into a city and rejected from his family home. A storm comes and he freezes to death.

Chapter 3: The third floor is opened and Kyoko is found dead, along with Yasuhiro. Everyone assumes it's a murder suicide until the position of the stab wounds is unaligned with what is said to have happened. Toko starts panicking and Celestia figures out she is the guilty party. Toko had killed Kyoko because she had gotten Byakuya executed and Yasuhiro walked in. She tried to frame him and lost. Toko is executed (First Kiss Prank) She is tossed in the dark and she sees the figure of Byakuya in the distance. She runs toward him, chased by a steamroller. She almost gets to him and sees its a cardboard cutout before she's flattened.

Chapter 4: Monokuma reveals that Sakura is a traitor that worked for him because he threatened her family. Everyone avoids her and Chihiro goes to upload Alter Ego. He is found dead at the bottom of the stairs with Alter Ego nowhere to be found. Sakura is accused because she had been near the stairs when Chihiro died but Sakura reveals she had uploaded Alter Ego herself when Chihiro was found dead. Alter Ego is found guilty for Chihiro's death, because he shouted to warn Chihiro and made him fall. Alter Ego is executed (Dozer Master)

Chapter 5: A dead body is found, but nobody knows who it is. Before the trial can properly run, Junko is found guilty and executed. She survives and makes her way back, remembering that she is actually Mukuro Ikosaba. She reveals Junko is the mastermind. The end of the story goes similarly to the canon game, with Mukuro providing the evidence to convict Junko. Leon, Celestia, Aoi, Sakura, Mukuro and Mondo are the survivors.